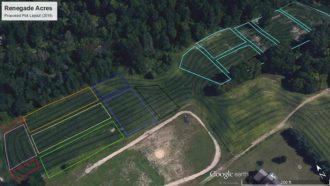 Christian and Katie Flickinger were experienced urban farmers in Michigan who were farming eight plots in various locations. When they decided to consolidate their operation and buy a 7-acre farm in Howell, Michigan, they faced the challenge of converting a long-standing, non-rotated cornfield into the organic, heirloom farm of their dreams. Among the other items on their to-do list, they needed to install irrigation, and they wanted to automate it using open-source hardware and software so they could share their plans with other farmers. They applied for an NCR-SARE Farmer Rancher grant and received $7,442 to create an economical, efficient automated irrigation system using consumer-grade lawn irrigation equipment.

“Small and urban farms often employ polyculture cropping systems,” explained Christian Flickinger. “Rather than a single, large crop covering multiple acres, small and urban farms will grow several different crops in small areas. Each crop may have its own irrigation requirements, some requiring more frequent irrigation and some requiring less frequent irrigation, which presents a unique challenge that this project aims to solve.”

To make sure the system was installed by their first planting on June 1st, they began work in late April 2016. The system they designed consisted of consumer-grade lawn irrigation valves, professional-grade drip tape, and a consumer-grade open-source lawn irrigation controller called OpenSprinkler. The controller is connected wirelessly to their network and the internet and can be activated manually or using a mobile website.

“Within a few weeks of installing and testing the irrigation controller I had set up irrigation schedules and weather-related irrigation delays,” said Flickinger. “The irrigation schedule was based on each plot’s plant types and the water flow as measured at the drip tape itself. I wanted to water as infrequently as possible, but still, maintain proper soil moisture.”

The big eureka moment came in 2017 when they implemented their intelligent irrigation controls.

“Overall, the system has outperformed our expectations,” said Flickinger. “We continue to find value in the original investment and have yet to purchase new drip tape. The amount of water we saved in year two compared to year one surprised us. We hope to continue to make improvements and possibly save more water.”