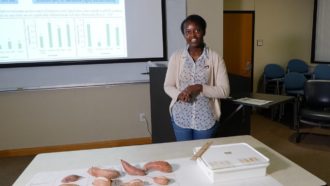 Wanna Kaluwasha discovered some benefits of incorporating cover crops in sweet potatoes with support from a 2016 SARE Graduate Student grant.

When Waana Kaluwasha was just a child, she decided she was going to grow up and help small-scale farmers.

“I come from Zambia, a country in Southern Africa where agriculture employs more than 85% of the population, with the majority being smallholder farmers who are faced with various challenges,” said Kaluwasha.

“Organic sweetpotato growers are challenged by sustainable soil management, which impacts the occurrence of soilborne disease, weed competition, and other pest issues that reduce storage root yield and/or quality,” said Kaluwasha. “Being organic, their options are limited for pest control.”

With support from an $11,956 SARE Graduate Student grant, Kaluwasha worked on a strategy for using cover crops in organic sweetpotato production. She teamed up with Jim Thomas from Share-Life Farms, a central Missouri farm that has been certified organic since 2004. Overall, they determined incorporating cover crops as green manure before transplanting sweetpotato slips resulted in decreased weeds, healthier sweetpotato plants, and ultimately 1.5 to 2.4-times marketable root yield compared to plots without cover crops. Together, they discovered:

“It was a rewarding experience working with farmers and a huge learning experience for both my advisor and I, as this was our first time working with cover crops as relating to organic sweetpotato production,” said Kaluwasha. “I learned so much interacting with the farmer cooperator, Mr. Jim Thomas, regarding organic production—it was good to see things from the farmer’s perspective.”

Kaluwasha is currently a Ph.D. student at Louisiana State University, where she is working on another SARE-supported research project to identify ways to prevent and/or manage Rhizopus Soft Rot (RSR) of sweetpotato.

Read a full case report about this project.

Watch Kaluwasha talk about her findings.