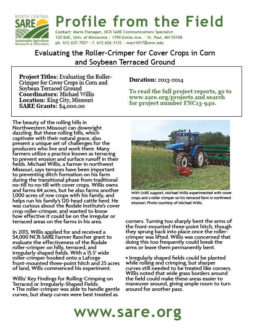 The beauty of the rolling hills in Northwestern Missouri can be downright dazzling. But these rolling hills, which captivate with their natural grace, also present a unique set of challenges for the producers who live and work there. Many farmers utilize a practice known as terracing to prevent erosion and surface runoff in their fields. Michael Willis, a farmer in northwest Missouri, says terraces have been important to preventing ditch formation on his farm during the transitional phase from traditional no-till to no-till with cover crops. Willis owns and farms 64 acres, but he also farms another 1,000 acres of row crops with his family, and helps run his family’s 120-head cattle herd. He was curious about the Rodale Institute’s cover crop roller-crimper, and wanted to know how effective it could be on the irregular or terraced areas on the farms in his area.

In 2013, Willis applied for and received a $4,000 NCR-SARE Farmer Rancher grant to evaluate the effectiveness of the Rodale roller-crimper on hilly, terraced, and irregularly shaped fields. With a 15.5’ wide roller-crimper hooked onto a LaForge front-mounted three-point hitch and 25 acres of land, Wills commenced his experiment.

Willis’ Key Findings for Rolling-Crimping on Terraced or Irregularly-Shaped Fields:

• The roller-crimper was able to handle gentle curves, but sharp curves were best treated as corners. Turning too sharply bent the arms of the front-mounted three-point hitch, though they sprung back into place once the roller-crimper was lifted. Willis was concerned that doing this too frequently could break the arms or leave them permanently bent.

• Irregularly shaped fields could be planted while rolling and crimping, but sharper curves still needed to be treated like corners. Willis noted that wide grass borders around the field could make these areas easier to maneuver around, giving ample room to turn around for another pass.

• Rolling and crimping while planting on terraces was easier on straight terraces Cover crops near the terrace riser were harder to reach due to the concern of hitting the riser with the roller-crimper.

• Cover crop mixes made rolling and crimping more difficult. When certain species of cover crops were ready to crimp, others still needed time to mature. Having a pure stand of one cover crop made it much easier to manage. Planting soybeans into cereal rye was the easiest to manage. In the photo above, Willis is using the roller crimper in cereal rye.

• The roller-crimper did a better job controlling taller cereal rye. Rye in lower fertility areas was shorter and had tougher stems, causing them to spring back up after the roller-crimper rolled over the rye.

• Willis says that he was able to do a preemergence application of herbicides even in less-than-ideal field conditions because of the large amount of cover crop biomass–the sprayer did not cut ruts in the field or pick up a significant amount of mud on the tires.

View Michael Willis’s presentation on this project, from the 2016 Farmer’s Forum, through NCR-SARE’s Youtube playlist. Visit www.youtube.com/NCRSAREvideo from this and other videos.