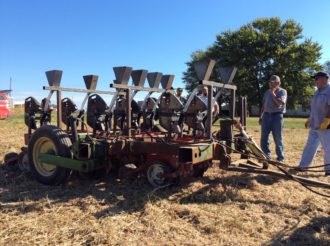 Ralph “Junior” Upton is no novice when it comes to no-till and cover crops. His grain farm in the northeast corner of Hamilton county Illinois is 100% no-till with 1,800 acres of corn, beans, and wheat, and approximately 1,200 acres in cover crops. Upton has been farming more than 50 years, and the farm has been 100 percent no-till for more than 20 years. Since adding cover crops in the late 1980s, Upton has seen improvements to his once compacted soil, and has been able to reduce his use of chemicals and fertilizers. Upton prefers to allow his cover crops to develop until planting time to get the fullest advantage from the cover crop biomass and root development, but waiting that long can pose problems when it comes to planting into heavy, green, cover crop residue.

Working with a project team that included John Pike of Pike Ag LLC, Mike Plumer of Conservation Agriculture, and Bronwyn Aly and Nathan Johanning with the University of Illinois Extension, Upton commenced building his precision seeder. He began by building a frame from scrap materials and a used planter that he had purchased specifically for the project. He also purchased crust buster seed meters for each of the nine planter units that are mounted to his frame. He set the planter units up in three rows on the frame and spaced them so that a row of seed could be planted every 7.5”. Units could adjust to match the seeding rate per acre, depending on the type of cover crop being planted. Starting in Fall 2015, they placed the most challenging cover crop species to plant into in the row centers and placed those that would either winter kill (or result in a more fragile residue) closer to the corn row itself.

Upton said that planting operations with his new seeder went well, generally, although there were some misalignment issues. He was hoping to have access to a real time kinematic (RTK) system for planting, and is confident that an auto steer or RTK system would allow the planting to be more efficient, due to improved placement of the rows. Despite the inefficiencies due to planter alignment, Upton said good results were achieved and much was learned, confirming that the general idea of the project and precision-planted cover crops was valid and effective. His plot yields were comparable to corn yields in the surrounding area and throughout the southeastern Illinois region.

“While cover crop interest has increased in recent years, broadcast seeding and drilling methods do not allow for the examination of how individual cover crops contribute to the successes or challenges of achieving a suitable stand of corn,” said John Pike. “This precision planting demonstration has allowed us to identify some promising strategies for cover crop species placement that could reduce challenges and increase success to fine tune cover crop systems.”

Pike said Upton’s work has spurred interest among farmers and crop advisors from across the state looking for more novel applications of cover crops. He says the information and demonstrations coming from this project have reached hundreds of producers. Field days have attracted more than 120 attendees, and Pike and Plumer have both utilized information from the project in their presentations at workshops and conferences across the region.

Learn more about Upton’s extensive work with cover crops and no-till in The New American Farmer.