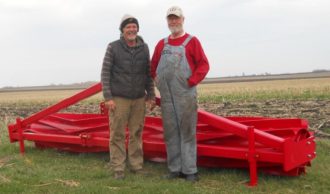 In 2002, a $6,500 SARE grant funded an idea for a new tool at the Rodale Institute in Kutztown, Pennsylvania. The tool was a roller-crimper, a steel drum with blades that was mounted to a tractor and used to roll down cover crops. The idea was that the mat of dead cover crops would act as mulch, which researchers hoped no-till farmers could use to suppress weeds. Fast forwarding to 2018, an increasing number of farmers are using roller-crimpers as an approach to terminate cover crops.

Two neighboring farmers in west-central Iowa, Billy Sammons and George Naylor, have been experimenting with sustainable farming practices for decades. Sammons operates a 120-acre no-till farm with non-GMO corn, conventional soybeans, and alfalfa. Naylor has been raising non- GMO corn and soybeans for 40 years on his 400 acre farm. Both farmers have been transitioning acres into organic production. In 2016, Sammons and Naylor teamed up and received a $14,893 NCR-SARE Farmer Rancher grant to experiment with cover crops and no-till to improve the sustainability of their corn and soybean systems.

Each farmer set aside a 40-acre plot for the project; Sammons’ test plot was no-till, and Naylor’s test plot was tilled. In September 2015, they broadcast cereal rye cover crop seed at 3 bushels per acre into standing corn in Sammons’ no-till plot using a modified Hagie highboy seeder. The following  May, they planted soybeans in 15-inch rows into the standing rye, which was about 5’ tall. They roller-crimped immediately (they crimped the rye twice since it was not quite in full anthesis). In the tilled plot, the soybeans were growing normally, as were the weeds. Within a month, the soybean growth in the no-till field matched the growth in the tilled field.

“We had good success in year one planting soybeans into standing rye and then crimping the rye post-planting,”said Sammons. “Mechanical, physical, and NOP-compliant herbicidal weed control costs in the tilled field eliminated any initial yield benefits according to calculations using the Ag Decision Maker averages for labor, fuel, materials, and equipment depreciation costs.”

During the second year of their project, they aerially applied a combination of oats and Hairy Vetch onto the tilled and no-till plots in October 2016. In the no-till field, the vetch survived a mild winter and was difficult to terminate. Sammons used a no-till, single sweep cultivator to boost the corn yield, but it was too late, and the yield suffered. Meanwhile, in the tilled field, the vetch was incorporated at about one foot of growth. The incorporation of the vetch in the tilled field prevented competitive interference and accelerated nutrient availability from the vetch, but Sammons says that finding is troublesome for a no-till operation.

“We need to experiment using a tactic learned from Jeff Moyer of the Rodale Institute,” said Sammons. “The strategy involves mowing the vetch early in the spring growing season which acts to ‘trick’ the vetch into accelerating its growth toward the reproductive stage. If this works, then we could roller-crimp the vetch earlier to allow for planting the corn earlier and utilizing the nitrogen from the decomposition of the vetch earlier in the growing cycle.”

So far, Sammons and Naylor have shared their findings at several field days and conferences. Their Practical Farmers of Iowa (PFI) field day in June 2016 attracted more than 120 people from five states, the largest crowd for a field day in PFI history, to date.

“Essentially, weed suppression was the central concern since out-of-control fields have such a negative influence on yields and successive weed seed banks because there are very few mechanical operations available once the cash crop has passed the early growing stages,” said Sammons. “Through personal correspondence with all of the farmers that actually bought roller-crimpers over the last year and one-half, the general consensus was that the investment was worth it.”

Sammons and Naylor want to continue to collect data, and in particular, they want to determine if rye can be crimped well after soybean emergence without injury. If they can, they intend to share their findings with the Risk Management Agency to ask for their consideration of providing an exemption on termination before emergence.