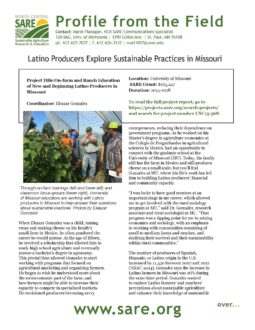 When Eleazar Gonzalez was a child, raising crops and making cheese on his family’s small farm in Mexico, he often pondered the career he would pursue. At the age of fifteen, he received a scholarship that allowed him to study high school agriculture and eventually pursue a bachelor’s degree in agronomy.

This pivotal time allowed Gonzalez to start working with programs that focused on agricultural marketing and organizing farmers. He began to wish he understood more about the socioeconomic part of the farm, and how farmers might be able to increase their capacity to compete in specialized markets. He envisioned producers becoming savvy entrepreneurs, reducing their dependence on government programs. As he worked on his Master’s degree in agriculture economics at the Colegio de Potgraduados in agricultural sciences in Mexico, had an opportunity to connect with the graduate school at the University of Missouri (MU). Today, his family still has the farm in Mexico and still produces cheese on a small scale, but you’ll find Gonzalez at MU, where his life’s work has led him to building Latino producers’ financial and community capacity.

“I was lucky to have good mentors at an important stage in my career, which allowed me to get involved with the rural sociology program at MU,” said Dr. Gonzalez, research associate and rural sociologist at MU. “That program was a tipping point for me in mixing economics and sociology, with an emphasis in working with communities consisting of small to medium farms and ranches, and studying their survival and their sustainability within rural communities.”

The number of producers of Spanish, Hispanic, or Latino origin in the U.S. increased by 11,430 between 2007 and 2012 (NSAC, 2014). Gonzalez says the increase in Latino farmers in Missouri was 26% during the same time period. Gonzalez wanted to explore Latino farmers’ and ranchers’ perceptions about sustainable agriculture and enhance their knowledge of sustainable production methods. In 2015, Gonzalez applied for and received $163,227 to document Latino producers’ awareness about current sustainable production methods and develop a curriculum based on their needs.

“The majority of Latino operations are small farms with limited acreage and their success depends on careful planning and decision making, so that they can protect their natural resources and reduce the need for costly inputs such as fertilizers or pesticides,” explained Gonzalez. “Though their preference for conventional methods is strong, when Latino producers attended a class that compared conventional methods to sustainable methods for small acreage farms, they showed a strong interest in learning more about sustainable methods. Targeted training to this audience has the potential to give them the tools needed to adopt production methods that are both environmentally and financially sustainable.”

With support from the SARE grant, Gonzalez and his research team held producer focus groups and conducted surveys reaching 122 Latino producers in Missouri. Then, they developed a curriculum that met the producers’ educational needs. During that process, the team noticed an opportunity to build soil, conservation, and specialty crop knowledge so they reached out and involved the Natural Resources Conservation Services (NRCS) and the Center for Urban Agriculture in program development and outreach. The curriculum was delivered to 46 producers through four panel workshops and four on farm workshops. They even developed an online Facebook group for Latino producers in Missouri. It is a closed group and currently has 74 members.

Although the project just wrapped up, changes in practices are already evident. Producers who never did a soil test before have started doing soil testing on their farms and ranches. As a result of being exposed to the NRCS EQIP program, three producers were granted contracts to build high tunnels. One producer, who installed his high tunnel in October 2018 has been motivated to start a CSA program. Additionally, a few of the ranchers involved in the project are more focused on improved management practices such as managing the number of paddocks on their ranches, and reducing the number of animals and the time they spend in each paddock. As for Gonzalez, he is inspired to continue work in this area.

“We need continued momentum in this direction, not only with Latino producers but also with other small farm minority and non-minority producers who have inherited farming as a way of life,” said Gonzalez.