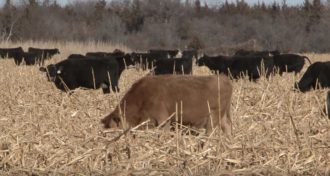 Since the 1850’s, several states in the North Central region have dominated corn production nationally, earning the nickname “The Corn Belt.” It should come as no surprise, then, that corn residue is abundant in the region. Rick Rasby, Associate Dean of Extension, professor, and Beef Specialist at the University of Nebraska-Lincoln (UNL) says corn residue can be excellent feed for livestock, and that cow costs can be reduced if the cows graze to get their nutrient needs as compared to feeding harvested feeds. Rasby was raised on a small, diversified livestock and crops farm, and grew up working with livestock producers.

“Crop residue is one of the most under-used feed resources for beef cattle, at least in Nebraska,” said Rasby. “In addition, the most expensive cost in the beef cow/calf enterprise is feed costs. Corn residue is a nutritious inexpensive feed source for beef cows. Row crop producers are concerned that allowing livestock to graze their corn residue will reduce the yield of the subsequent crop and also cause compaction.”

To address producers’ concerns, Rasby applied for a received a $199,059 NCR-SARE Research and Education grant to determine the effects of corn residue grazing and baling on subsequent grain yield and soil productivity. The team had already collected long-term data from two locations in Nebraska, but they wanted to expand their research by using cooperator sites across Nebraska that had different soil types. Six sites were identified to participate in the project with three replicated treatments: control, baled, and grazed ( using UNL corn residue grazing recommendations). Rasby’s team collected yield data and soil data in the spring and fall each year for three years.

After three years of the study, Rasby reported that there were no yield reductions in corn or soybean yield (when the field was in a corn-soybean rotation) when corn residue was removed by grazing. He also reported that grazing corn residue, using stocking rates recommended by the University of Nebraska, did not result in compaction. Although the team reported no reduction in yield and no significant compaction with grazing corn residue, there was water and wind erosion when residue was removed by baling.

Rasby says that for every bushel of corn, 18 lbs. of stems, 5.8 lbs. of cobs, and 16 lbs. of husks and leaves are produced. Cattle are selective grazers, and will eat any grain remaining first, followed by the husk and leaf, and finally the cobs and stems. UNL’s corn residue grazing recommendation is to remove 8 pounds of husk and leaves per bushel of corn produced. Rasby understands the importance of leaving residue on the field for soil health purposes; he says that targeting a grazing strategy for removal of 8 pounds of husks and leaves per bushel means that just 12% of the total residue is removed.

“Over the last 15 years, cow costs have almost tripled,” said Rasby. ”Crop residue grazing, when grazed at the University of Nebraska recommended rates, allows cow/calf producers to reduce feed costs and remain sustainable. In addition, our data says there is a slight increase in grain yield when the residue is grazed the previous year – a win-win situation.”

Visit https://beef.unl.edu/documents/2017-beef-report/201717-Effect-of-Corn-Residue-Grazing-or-Baling-on-Subsequent-Crop-Yield-and-Nutrient-Removal.pdf/ to see detailed figures from the project, or contact the NCR-SARE office.