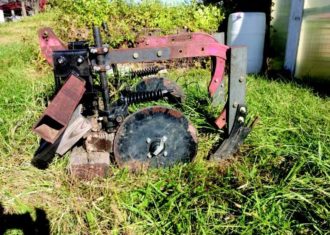 Ruggieri and Graff wondered if they could use cover crops to minimize labor as well by reducing the need for hand-mulching crops. They wanted to try a method that was developed by Dr. Ron Morse of Virginia Tech that combines reduced tillage and cover crops as mulch. They received a $7,480 NCR-SARE Farmer Rancher grant to conduct their cover crop mulch experiment.

“Summer heat and drought require mulch to conserve moisture, minimize labor associated with weeding, and keep the soil cool,” said Ruggieri. “Growing our mulch in place using reduced tillage methods will save considerable time, energy, and money while adding fertility to the soil.”

During the course of the project, they seeded cover crops, fabricated a no-till planting aid (NTPA) and seeder, rolled and crimped cover crops, and planted vegetable crops into the rolled beds. They fabricated their NTPA with a combination of on-farm implement parts and purchased items (toolbar clamps, no-till coulters, fertilizer knives).

The NTPA seemed to work well in their silt/clay soils, cutting a 6 to 8-inch deep furrow that would allow for the planting of transplants. They fabricated their seeder with a new toolbar and four Cole Planter vegetable seeders. After some experimentation, the seeder worked adequately to produce a good stand of cover crops. The seeder served a dual purpose as well because they could also use it to seed cash crops.

They planted a rye/vetch cover crop in September and then rolled it down in late May. Planting brassicas into rolled/ crimped cover crops proved to be challenging due to an abundance of rain in both 2015 and 2016. They found that it was difficult to keep weeds smothered during the period between roll-down and brassica planting in mid to late-July.

“The results show that the spaded and mulched bed performed over 300% better than the rolled/crimped bed,” said Ruggieri. “While both beds experienced a significant amount of blossom end rot during the first week or so of harvesting, the hay mulched bed recovered the quickest and produced the most. In addition, the hay mulched plants were a deeper green and were more vigorous in their growth and fruit-set.”