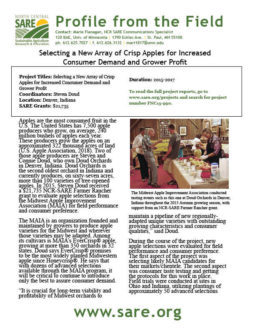 Apples are the most consumed fruit in the U.S. The United States has 7,500 apple producers who grow, on average, 240 million bushels of apples each year. These producers grow the apples on an approximated 322 thousand acres of land (U.S. Apple Association, 2018). Two of those apple producers are Steven and Connie Doud, who own Doud Orchards in Denver, Indiana. Doud Orchards is the second oldest orchard in Indiana and currently produces, on sixty-seven acres, more than 100 varieties of tree-ripened apples. In 2015, Steven Doud received a $21,735 NCR-SARE Farmer Rancher grant to evaluate apple selections from the Midwest Apple Improvement Association (MAIA) for field performance and consumer preference.

The MAIA is an organization founded and maintained by growers to produce apple varieties for the Midwest and wherever those varieties may be adapted. Among its cultivars is MAIA’s EverCrisp® apple, growing at more than 350 orchards in 32 states. Doud says EverCrisp® promises to be the most widely planted Midwestern apple since Honeycrisp®. He says that with dozens of advanced selections available through the MAIA program, it will be critical to continue to introduce only the best to assure consumer demand.

“It is crucial for long-term viability and profitability of Midwest orchards to maintain a pipeline of new regionally-adapted unique varieties with outstanding growing characteristics and consumer qualities,” said Doud. During the course of the project, new apple selections were evaluated for field performance and consumer preference. The first aspect of the project was selecting likely MAIA candidates for their markets/clientele. The second aspect was consumer taste testing and getting the protocols for this work in place. Field trials were conducted at sites in Ohio and Indiana, utilizing plantings of approximately 50 advanced selections on dwarfing rootstock. Data was collected to determine superior horticultural characteristics over the course of a ten week season. Consumer tastings were conducted at eight sites in Indiana and Ohio with more than 2,500 consumers involved. MAIA apples were tested against the best current apples of the autumn 2015 season.

“Our data contributed to MAIA decisions to proceed with patenting, tree propagation, and release of two advanced selections after the 2015 season,” said Doud. “Additionally, two selections with specialized home garden qualities are now introduced through a private nursery company.”

Doud says data and observations made during the grant project are being used to make introduction decisions on three new selections in 2018. “While the MAIA program is an ongoing effort to develop and introduce new superior apple varieties for Midwestern growers and consumers, this SARE project produced data which allowed logical planning for introduction and promotion of a range of advanced selection germplasm,” reported Doud.

View Doud’s presentation on this project, from the 2018 Farmers Forum, through NCR-SARE’s Youtube playlist. Visit www.youtube.com/NCRSAREvideo for this and other videos.