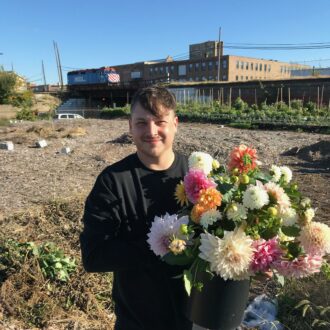 When we think of soil health, concepts like soil structure and water and nutrient holding capacity come to mind. For urban farmers managing contaminants such as lead and arsenic is another major soil health concern. Dirty Boots Flowers is an urban flower farm that shares a small parcel of land with two other farms in the East Garfield Park neighborhood of Chicago, Illinois.

Dirty Boots grows more than 20 varieties of flowers which they sell for weddings, events, offices, and personal deliveries. One of their challenges has been soil remediation. With help from a $14,975 NCR-SARE Farmer Rancher grant, Dirty Boots owner, Casey Campbell (nee Sabatka) is working with one of the neighboring farms, Chicago Patchwork Farms, on soil remediation.

“Two years ago, we discovered that the chickens at Chicago Patchwork Farms were able to transform wood chips and farm waste into 75 cubic yards of clean, healthy soil,” said Campbell. “This made us wonder how else we may be able to affordably work with the toxic land in our communities.”

The two farms proposed a two-part project to test some solutions for cleaning up their urban soil. They wanted to try a product called Apatite II that is used to clean up soil and groundwater contaminated with metals, and they also wanted to try a technique called phytoremediation in which sunflowers, marigolds, native grasses, and ferns work to hyper accumulate contaminants. They set up thirty 30'x4' testbeds and commenced their work, applying with Apatite II to some plots and planting the phytoextraction plants in others. By the end of the project, most beds had fallen below the EPA safe soil standard of 400 mg/kg for lead. However, none of them had fallen below 100 mg/kg, the safe level for gardening.

Using Apatite II, the lead content of the testbeds dropped dramatically, but it was expensive, and arsenic levels increased in these testbeds.

"Apatite II is fast-acting, so initially we viewed this as the most viable solution for soil with a lead result that is far above the EPA's safety standard," said Campbell. "However, the price point makes it pretty unrealistic for most urban farmers. Additionally, the final soil samples did reveal an interesting piece of information. As the bioavailability of lead in the two soil samples decreased, for some reason the bioavailability of arsenic increased."

Phytoremediation did result in a decrease in both lead and arsenic levels, but safe disposal of the hazardous plant material was difficult.

"The ferns were hard to source, expensive, and not well suited to the conditions of our land," said Campbell. "However, the mustards, sunflowers, marigolds, and grasses thrived. One of the biggest barriers we faced was the disposal of hazardous plant material that resulted from phytoextraction. Upon investigating further and discussing with our network, we have found that this seems to be a hole within phytoremediation...accessibility to safe disposal for your average farmer/rancher or small gardener. The phytoremediation has no clear pathway in terms of disposal of hazardous materials."

Although they documented decreases in the percentages of lead and arsenic in the soil, the project team did not end up recommending the methods as the final solution for soil remediation for the reasons above. However, Campbell hopes future researchers can use the information they learned through their project and build on it.