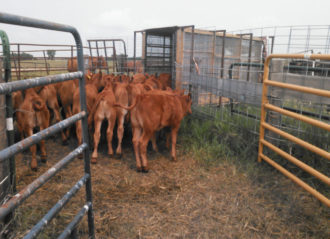 Linda Simmons is a cattle rancher in Twin Brooks, South Dakota. Beef and sheep producers in northeastern South Dakota depend largely on native rangeland, and there are several species of flies that can cause serious economic losses there. Several years ago, Simmons experienced a failure with her feed-through insecticide plan.

“We had a terrible incident of failed insecticide control of flies one year after using feed through insecticide for two years,” recalled Simmons. “The third year was a sudden failure in mid season when calves were still young. We built a corral as fast as we could in order to have a vet come and treat all 70-some pairs. Every calf required an injection of antibiotics to save their eyes, and many needed their eyelids sewn with dissolving stitches to save an eye. We were lucky that none ended up blind after treatment. The cost was around $5,000; that is unsustainable from any point of view.”

Simmons was concerned that perhaps her use of pesticides had resulted in pesticide resistance, as well as a reduction in populations of beneficial insects, such as dung beetles. Knowing that strategies for fly control are more effective when adjacent pastures and feedlots are included, Simmons worked with the producers who were adjacent to her land and received a $21,287 NCR-SARE Farmer Rancher grant to experiment with various reduced-pesticide fly control systems to help to conserve beneficial insects, especially the dung beetle.

Cattle manure is a popular breeding ground for flies and is an incubator for gastrointestinal parasites—a single manure pat can generate 60−80 horn fly adults. Dung beetles are particularly helpful because as they consume the manure, it becomes less available to host flies and parasites. In fact, fly populations have been shown to decrease significantly in areas with dung beetle activity (Thomas, 2001).  In order to reduce their dependence on pesticides, which can be harmful to beneficial dung beetles, the project organizers implemented a variety of strategies, including rotational grazing. They also built nzi [EN-zee] flexible cloth fly traps (‘nzi’ is the Swahili word for ‘fly’) and a trial of Willis Bruce’s “Walk Through Horn Fly Trap” using plans from the University of Missouri. To their knowledge, neither of these types of traps had been used on beef cattle at pasture in Northeastern South Dakota.

“Bruce’s Walk Through Horn Fly Trap works well and it doesn’t require much labor to use,” reported Simmons. “It works so well we didn’t even have to place it where cattle use it every day. A few treatments a year headed off any need to treat with insecticides. This summer  flies were even easier to control using it. I only needed it twice. It’s going to make me lazy!”

Simmons reported that the 30 ranchers and land managers who attended their project field day proved that a lot of producers value dung beetles in the rangeland ecosystem for their contribution to the whole. She hopes this project will help promote a northeastern South Dakota method for monitoring and managing both fly pests and dung beetles for long term profits on livestock.

Over the course of this project, Simmons realized that there was a need for a planning and assessment guide for cattle and sheep raisers to do their own pest and beneficial insect monitoring. She developed a manual, A Dung Beetle’s Place on Your Ranch, for looking after dung beetles by reducing pesticides, using non-chemical controls, and using chemical controls carefully and thoughtfully.

“This summer a friend of mine called me for fly control advice because of the project,” she said. “Unfortunately, he was already in the middle of a bad fly outbreak, and I am definitely not a veterinarian or expert on pesticides; that’s why I like the non-pesticide controls. They aren’t fraught with mistakes and don’t require any more expertise than teaching the cattle to walk around.”

Want to hear more from Simmons? Hear her talk about her SARE project in this video, recorded on her ranch in South Dakota.