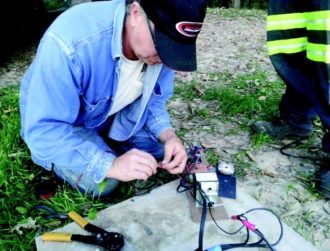 Enhancing biodiversity on a farm can result in cleaner air and water and increased wildlife. But what happens when the wildlife gets a little too close to your crop? That’s the problem sweet corn grower, Scott Kelly, was facing on his farm near Kearney, Missouri.

“The demands of growing produce sometimes seems never-ending,” said Kelly. “When you do finally get to put your head on the pillow, your thoughts turn to those pesky critters just waiting for you to nod off. Deer and raccoons can devastate a garden.”

With support from a $7,470 NCR-SARE Farmer Rancher grant, Kelly proposed to work with Jim Pierce with Lincoln University’s Innovative Small Farmers’ Outreach Program to develop “The Guardian,” a sprinkler deterrent system. He wanted it to be harmless to the wildlife intruders, ecologically sound, and more economical and aesthetically appealing than fencing.

His farm, Cary’s You-Pick, produces various vegetables and herbs for local customers, who want fresh produce and the experience of handpicking the crops themselves. The you-pick field is located near a wooded area, which brings deer and raccoons close to their crops. Kelly wanted to avoid having to use fencing as much as possible, due to the nature of their business.

“As the size of the garden expands it (fencing) becomes more cost-prohibitive and not only restricts wildlife access but the people and equipment needed to work the garden,” explained Kelly.

During the project, they developed a perimeter sprinkler system triggered by a laser tripwire, which essentially scares away wildlife intruders. Stevens says the system consists mainly of the aforementioned sprinklers, PVC pipe laid around the perimeter of the garden, and medium intensity lasers that are directed at photocell devices that activate a timer and electronic water valves. It is designed to be activated during periods of wildlife “attack” (i.e. dusk until dawn). So far, he’s pleased with the results.

“Since becoming operational, we have had zero deer or raccoon intrusions, actually we don’t even see any tracks inside the protected area, whereas last year we lost about 800 sweet corn plants and some tomatoes to deer and raccoon intrusion,” said Kelly. “We feel the project was a total success, beyond what we anticipated.”

Kelly says the next step is to further evaluate the system’s tendency to change behavioral patterns of the wildlife intruders to avoid the protected area. He also wants to make the system more economical.