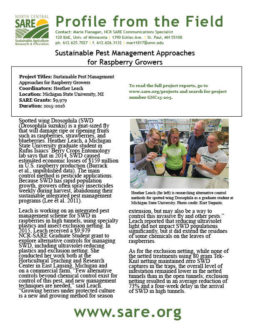 Leach is working on an integrated pest management scheme for SWD in raspberries in high tunnels, using specialty plastics and insect exclusion netting. In 2015, Leach received a $9,979 NCR-SARE Graduate Student grant to explore alternative controls for managing SWD, including ultraviolet-reducing plastics and exclusion netting. She conducted her work both at the Horticultural Teaching and Research Center in East Lansing, Michigan and on a commercial farm. “Few alternative controls beyond chemical control exist for control of this pest, and new management techniques are needed,” said Leach. “Growing berries under protected culture is a new and growing method for season extension, but may also be a way to control this invasive fly and other pests.” Leach reported that reducing ultraviolet light did not impact SWD populations significantly, but it did extend the residues of some chemicals on the leaves of raspberries.

As for the exclusion netting, while none of the netted treatments using 80 gram Tek-Knit netting maintained zero SWD captures in the traps, the overall level of infestation remained lower in the netted tunnels than in the open tunnels; exclusion netting resulted in an average reduction of 73% and a four-week delay in the arrival of SWD in high tunnels. Leach says there was little effect on the quality of the raspberries grown under the netted high tunnels.

“Exclusion netting can be a viable way to reduce SWD and other pests without negatively affecting the fruit quality in high tunnel raspberry production,” said Leach. “Moreover, we found that the exclusion netting resulted in a delay in the arrival of SWD, which could eliminate SWD in the summer crop of raspberries entirely. Delaying the arrival of SWD also reduces the amount of insecticide that needs to be applied during this time, reducing costs and risk to pollinators. This is one of the first alternative management tactics proposed for SWD that could be used in place of chemical management.”

View Leach’s presentation on this project from the 2018 Farmer’s Forum, through NCR-SARE’s youtube playlist. Visit www.youtube.com/NCRSAREvideo for this and other videos.