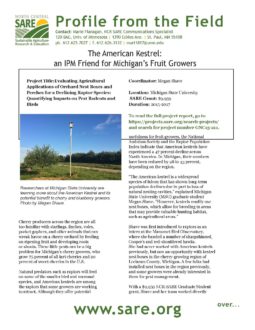 Cherry producers across the region are all too familiar with starlings, finches, voles, pocket gophers, and other animals that can wreak havoc on a cherry orchard by feeding on ripening fruit and developing roots or shoots. These little pests can be a big problem for Michigan’s cherry growers, who grow 75 percent of all tart cherries and 20 percent of sweet cherries in the U.S.

Natural predators such as raptors will feed on some of the smaller bird and mammal species, and American kestrels are among the raptors that some growers are working to attract. Although they offer potential usefulness for fruit growers, the National Audubon Society and the Raptor Population Index indicate that American kestrels have experienced a 47 percent decline across North America. In Michigan, their numbers have been reduced by 28 to 43 percent, depending on the region.

“The American kestrel is a widespread species of falcon that has shown long-term population declines due in part to loss of natural nesting cavities,” explained Michigan State University (MSU) graduate student Megan Shave. “However, kestrels readily use nest boxes, which allow for breeding in areas that may provide valuable hunting habitat, such as agricultural areas.”

Shave was first introduced to raptors as an intern at the Manomet Bird Observatory, where she banded a number of sharpshinned, Cooper’s and red-shouldered hawks. She had never worked with American kestrels previously, but saw an opportunity with kestrel nest boxes in the cherry-growing region of Leelanau County, Michigan. A few folks had installed nest boxes in the region previously, and some growers were already interested in them for pest management.

With a $9,959 NCR-SARE Graduate Student grant, Shave and her team worked directly with eleven cherry growers in Leelanau County to explore the effectiveness of habitat enhancement for kestrels. They installed 25 new nest boxes and monitored kestrel and prey abundances. They tracked kestrel and orchard pest behavior with a variety of technologies including weatherproof cameras with night vision and GPS data loggers. The kestrels provisioned their young with a variety of orchard pests, including grasshoppers, voles, and fruit-eating birds. Although the kestrels did not bring birds to their nests as frequently as small mammal and insect prey, Shave found that fruit-eating birds were less abundant in orchards with active kestrel boxes, perhaps because they were deterred by the presence of kestrels. All of this was good news for growers.

“I’ve had a nesting pair of kestrels for many years now, and I just don’t have bird problems nearly as bad as I did before,” said Jim Nugent, chair of the Michigan Tree Fruit Commission and owner of Sunblossom Orchards in Leelanau County. “I absolutely recommend them (nesting boxes), especially for sweet cherry orchards. I always felt they were effective, but now, with the MSU study, we have data to back that up.”

Through subsequent outside grant funding, the team was able to conduct a benefit– cost analysis of nest box installation. They concluded that for every dollar spent on nest boxes, $84 to $357 of sweet cherries would be saved. Expanding on that, regional economic modeling predicted that increased sweet cherry production from reduced bird damage would result in 46–50 jobs created and $2.2 million to $2.4 million in increased income for the state of Michigan over a 5-year period. Their findings have prompted an expansion of the nest box program into the blueberry growing region of southwestern Michigan. Additionally, ongoing research will use a national survey of fruit growers and in-person interviews, along with modeling approaches, to determine the factors that influence growers to use predator nest boxes as a pest management practice.

“Kestrel nest boxes in sweet cherry orchards provide a highly cost-effective ecosystem service with potential reverberating benefits for a regional economy,” said Shave. “Given the low cost to install and maintain a kestrel nest box, I think our results could encourage more growers to start considering habitat improvements as a part of their integrative pest management strategies.”

The team has presented their results at the North Central region at expos and workshops, and at the 28th Vertebrate Pest Conference in California.