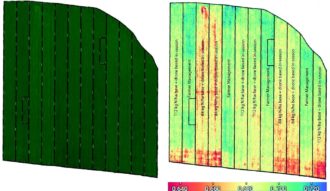 From shooting photos from small planes to using a powered parachute with the help of a sport pilot license, Dean Stevens has been taking to the sky to catch a glimpse of his family’s southeast Nebraska farm fields for the better part of 30 years. With recent support from a $15,000 NCR-SARE Farmer Rancher grant, he’s taking aerial observation to the next level, using multi-spectral sensors carried on drones to inform his nitrogen (N) management.

Stevens says there are advantages associated with in-season N applications, but due to the rolling topography in their location, where contour and terrace farming techniques are practiced, ground-based, in-season N application is not common due to the risk of crop damage. Some farmers in the area do aerial N applications, but they aren’t able to take advantage of the crop canopy sensor technology that is commonly available for high clearance applicators. Stevens wanted to be able to apply N fertilizer aerially during the growing season and then be able to monitor the crop with sensors.

Working with his daughter, a University of Nebraska-Lincoln Extension Educator, Laura Thompson, his son-in-law Nathan Thompson (both of whom are FAA licensed drone pilots), and Dale Yoesel, a farmer in Rulo, Nebraska, Stevens put together a project. They would conduct airplane-based aerial N applications and then evaluate the fields with sensors mounted on drones to enable crop sensing to occur from the air.

The sensors they used collected Normalized Difference Red Edge (NDRE) values from three sites before and after the in-season N application. Among other things, NDRE technology shows users the chlorophyll content in leaves. High values of NDRE represent high levels of leaf chlorophyll content, so, for instance, yellowed leaves would have the lowest values (red), while healthy plants have the highest values (blue). In conjunction with the NDRE data, the team used algorithms and UNL’s Hybrid-Maize models to calculate the optimal in-season N rate. They also evaluated two different N base rates to attempt to identify the optimum base rate for in-season N sensing and application. They used the data to evaluate final crop yield, N use efficiency, and net return. At all three sites, less N was applied when the drone and sensor method was used compared to when the farmer’s traditional method was used. With drone-based sensing, N savings were 25lbs. N/ac, 35lbs. N/ac, and 27lbs. N/ac for the site in 2017, site 1 in 2018, and site 2 in 2018 respectively.

“Drone sensors can be used successfully to monitor corn nitrogen needs in-season,” said Stevens. “The varying N requirements can be met on entire cornfields with variable rate equipped planes. This is an excellent way to avoid pre-applying more N than a corn crop would be able to utilize if conditions became unfavorable during the pending growing season.”