Connecting the Dots Between Farmers and Rural Refrigeration

Cottage Food: Launch a Bakery from Your Farm Kitchen

Growers in the North Central region are exploring the benefits of intercropping legumes with the intermediate wheatgrass Kernza®.

Farmers have long relied on liquid fish fertilizers because they are a source burn-free nitrogen, phosphorus, and potassium. Traditional Native American growers were well aware of the benefits that decaying fish could bring to their soil; they buried fish under mounded soil and planted the 3 Sisters (corn, beans, and squash) directly on top of […]

When Maria Carter’s parents emigrated to America from the Netherlands in 1956, they brought along a knowledge of growing seed potatoes. Shortly after they put down roots in North Dakota, they put down tubers to start their new seed potato farm. They knew potato growers needed healthy seed potatoes, and they knew how to grow […] 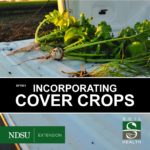 In a short growing season like North Dakota's, effectively using cover crops can seem like a challenge. Establishing a specific on-farm goal is key to utilizing cover crops successfully. Getting familiar with and then fine-tuning approaches is important to achieve desired outcomes. In this publication, NDSU soil health researchers, Abbey Wick, Caley Gasch, and Marisol Berti provide a starting point.

In 2002, a $6,500 SARE grant funded an idea for a new tool at the Rodale Institute in Kutztown, Pennsylvania. The tool was a roller-crimper, a steel drum with blades that was mounted to a tractor and used to roll down cover crops. The idea was that the mat of dead cover crops would act as mulch, which researchers hoped no-till farmers […]

Our $20-billion-a-year crop industry relies on insect pollination, but diseases, pests, and colony collapse disorder are knocking out 30 percent of beekeepers’ colonies every growing season. There are as many as 125,000 beekeepers in the country. And while 2.77 million honey-producing colonies generated 161.8 million pounds of raw honey in 2016, the annual value of […]

Apples are the most consumed fruit in the U.S. The United States has 7,500 apple producers who grow, on average, 240 million bushels of apples each year. These producers grow the apples on an approximated 322 thousand acres of land (U.S. Apple Association, 2018). Two of those apple producers are Steven and Connie Doud, who own […]

Eric Middleton knows that beneficial insects can provide ecosystem services to agriculture, ranging from pollination to pest suppression. As a graduate student at the University of Minnesota, Middleton received a $12,000 NCR-SARE Graduate Student grant to compare how floral plantings in the margins of conventionally managed potato fields affect pollinator and predator abundance and richness, as […]

Between April and May the apple orchards and fields at Curtis Orchard and Pumpkin Patch in Champaign, Illinois boast plenty of blossoms for hungry pollinators. Curtis is part of an Illinois centennial farm, founded in 1873, offering apples, pumpkins, honey, and a variety of agritourism adventures. All fun aside, they’re quite serious about sustaining their […]

Building Community and Growing Food with the Next Generation

Greeting parishioners alongside a church parking lot, a four-acre parcel with the accessibility of an urban farm and the mission of a non-profit has been quietly producing and providing food to community members. Sola Gratia Farm is a community-based farm in Urbana, Illinois that is dedicated to producing locally grown, high-quality, natural produce. The community […]

Grown on an estimated 10 million acres across the country, cover crops are becoming an indispensable part of crop rotations. To maintain this momentum, the development of reliable information at the local level—how to craft a diversified rotation that pays—needs to keep pace with growth in farmers’ interest. That is what motivated Josh Roe to […]