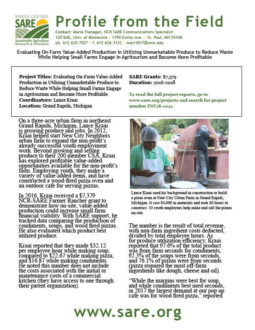 On a three-acre urban farm in northeast Grand Rapids, Michigan, Lance Kraai is growing produce and jobs. In 2012, Kraai helped start New City Neighbors urban farm to expand the non-profit’s already successful youth employment work. Beyond growing and selling produce to their 200 member CSA, Kraai has explored profitable value-added opportunities available for the non-profit’s farm. Employing youth, they make a variety of value-added items, and have constructed a wood-fired pizza oven and an outdoor cafe for serving pizzas.

Kraai reported that they made $32.12 per employee hour while making soup, compared to $22.67 while making pizza, and $16.87 while making condiments. He noted this number does not include the costs associated with the initial or maintenance costs of a commercial kitchen (they have access to one through their parent organization). The number is the result of total revenue, with non-farm ingredient costs deducted, divided by total employee hours. As for produce utilization efficiency, Kraai reported that 97.6% of the total product was from farm seconds for condiments, 92.3% of the soups were from seconds, and 76.1% of pizzas were from seconds (pizza required the most off-farm ingredients like dough, cheese and oil).

“While the margins were best for soup, and while condiments best used seconds, in 2017 the largest demand at our pop up cafe was for wood fired pizza,” reported Kraai. “In 2017, we piloted seven Thursday afternoon pop up cafes. We sold soup, baked goods, salads, and wood fired pizza. We grossed $16,920 in total sales from these seven events. $8,710 of these sales were from pizza compared to only $1,823 from soups. Remaining revenue was from baked goods, salads, and drinks. We also saw that the pizza sales brought in new customers that were not currently farm shareholders. Soup did not have enough appeal to bring in new customers.” Kraai plans to increase pizza and soup production in 2018 with 15 pizza events, and a soup share option as an add-on to their vegetable CSA.

View Kraai’s presentation on this project, from the 2018 Farmer’s Forum, through NCR-SARE Youtube playlist. Visit www.youtube.com/NCRSAREvideo for this and other videos.