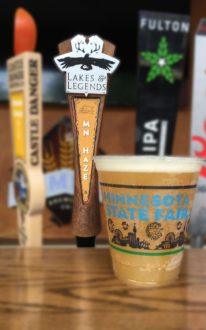 With support from SARE, a Minnesota farmer learned that Conlon barley, Paul hulless oats, and Red Fife wheat could be malted with good flavor for prize-winning beers. Photo courtesy of Lakes and Legends Brewing Company.

Minnesota ranks 15th nationwide for craft breweries. All told, 196 craft brewing companies are making 4.8 gallons of beer for each of-age adult in the land of 10,000 lakes per year (Brewer’s Association, 2019). It was during a tour of a Minnesota brewery that local farmer Noreen Thomas first became inspired to connect with the craft brewing industry after seeing all the grains they used. Thomas and her husband, Lee farm 1,200 certified organic acres of crops and produce on their fifth-generation farm nestled on the Buffalo River near Moorhead, Minnesota.

“Craft beer enthusiasts are constantly seeking novel ingredients to expand the variety of offerings, and create a unique experience around their brew,” said Thomas. “This quest for a unique flavor can be met with locally-sourced ingredients; thus, providing expanded market options for farmers to grow grain for the production.”

Each batch size for the malting process required a minimum of 2500 pounds of grain; including shrinkage involved within the process. They brought the grains to Vertical Malt for malting and then sent the malt to various breweries.

“The varieties that worked well were organic Conlon barley, Paul hulless oats, and Red Fife wheat,” reported Thomas. “Tinka barley was difficult to grow and lodged as well. Plus, when the weather was raining non stop at harvest time, the DON (a contaminating mycotoxin known as deoxynivalenol) popped up to near 3.0 ppm (less than 1 ppm is acceptable). ”

Working with Vertical Malt gave Thomas the opportunity to connect with Lakes and Legends Brewing. Together, they produced a 100-percent Minnesotan beer called MN Haze, a hazy IPA brewed for the 2019 Minnesota State Fair. The brew sold out during the first day of the fair and they restocked; it received a white ribbon from The Growler among 48 new alcoholic drinks at the state fair in 2019.

“We learned a lot about the brewing industry and are still learning,” said Thomas. “Without the SARE grant I would not have met any of these people. It gave us resources to explore. The work with breweries is emerging. They are the most intense of relationships. I have worked in local foods for 18 years and found this work to be much more relationship bound with more questions about quality of product.”