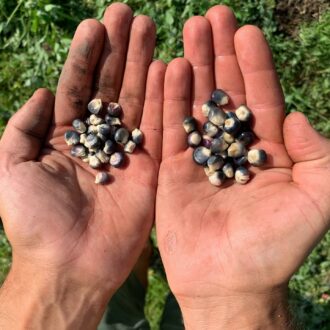 This story appears in the Summer 2021 issue of the NCR-SARE newsletter, Field Notes.

From a small piece of land in Lawrence, Kansas, Pantaleon Florez III directly markets vegetables and works to feed those in need. His farm, Maseualkualli Farms, means “The People’s Farm” in Nahuatl, the language of the Indigenous Uto-Aztecan people. Combining his interests in Indigenous food, crop diversity, and no-till practices, Florez applied for and received an $8,908 NCR-SARE Farmer Rancher grant to study growing three different varieties of heirloom corn using organic, no-till methods.

Working with two students from the University of Kansas, Paola Ramírez Peña and Ashley Aranda, they planted trial plots of Guanajuato 31, Michoacan 333, and Organic Blue Corn.

Interested in Mexica ancestral knowledge, Florez studied cultivation practices described in the Florentine Codex, a 16th-century Mesoamerican ethnographic book series. The team read about a growing method that required hilling soil around the base of the plant multiple times across the growing season. They compared this method with no-till best practices from the University of Nebraska-Lincoln’s Cropwatch.

Because they valued the recorded knowledge of those who grew maize before them, the team members created ethnographic accounts to share their experiences.

“The work we did on the farm grew into stories to share with my grandmothers in Mexico and a way to entertain my younger sisters as we cultivated our gardens here,” said project participant Paola Ramírez Peña. “Through the ancestral seeds and farming practices, I became inducted into a long-standing culture built around maíz.”

All three ethnographies included accounts of discovering edible fungi called huitlacoche (left) in their crop. The emergence of this ancestral delicacy was meaningful for the entire group.

“The ancestors had sent a gift,” recalled Florez. ”I felt gratitude. A comforting and cool breeze picked up. My heart was open, and I felt closer to my ancestors. I felt deeply validated in my research. I felt a deep sense of purpose. This is the work I am supposed to be doing.”

They shared the corn they grew and information about the corn varieties through markets and community events. Florez is currently collaborating with a local Peruvian farmer to grow a purple corn variety for making dyes and chicha morada, a Peruvian drink made with corn, pineapple, quince/apple, cinnamon, and clove.

To read more about the corn variety trials and to read the complete ethnographies mentioned in this story, visit the SARE project reporting website https://projects.sare.org/project-reports/fnc19-1161/, or contact the NCR-SARE office.