With support from SARE, a Minnesota farmer learned that Conlon barley, Paul hulless oats, and Red Fife wheat could be malted with good flavor for prize-winning beers.

Foodbanking and Farming with Ohio's Youth

The Foodbank, Inc. has distributed more than 4 million pounds of food since the beginning of the coronavirus outbreak, while helping area youth learn more about sustainable growing, local food systems, and food insecurity.

Cover crops can improve a farmer’s bottom line in many ways, whether it’s by lowering fertilizer needs, reducing weed and pest pressure, or boosting yields, but as with any investment, there are things to take into consideration when planning. Jim Stute is a farmer in southeast Wisconsin, and a crop and soil researcher with the […]

From shooting photos from small planes to using a powered parachute with the help of a sport pilot license, Dean Stevens has been taking to the sky to catch a glimpse of his family’s southeast Nebraska farm fields for the better part of 30 years. With recent support from a $15,000 NCR-SARE Farmer Rancher grant, […]

Watching feed prices go up and pork prices go down can make value-added product lines attractive for a hog producer. Jim Pierce is working on value-added charcuterie products on his farm in Missouri.

In 2015, a small farm cooperative in the Kansas City area had a dilemma. Fresh Farm HQ (FFHQ) Cooperative Association was helping small and medium-sized farmers access wholesale markets in the Kansas City area, but with more than 18 produce distribution companies already operating in the area, they needed to differentiate themselves; they needed to […]

On five acres of land in central Michigan, Dru and Adam Montri grow vegetables with seasonal field production and six hoophouses. They sell their Ten Hens Farms produce at the farmers market, to local grocers, area restaurants, and a regional food distributor. They had a problem with root crops, and two other nearby vegetable growers did […]

Integrating agriculture into urban settings is not a new concept, but more and more, the benefits are being realized by communities, policymakers, and food-system entrepreneurs (NCAT-ATTRA 2018).  One such entrepreneur is Brent Lubbert, whose nonprofit organization is growing vegetables and future farmers on six plots of land in the Gifford Park Neighborhood of Omaha, Nebraska. […]

Whether building boxes for mason bees or planting habitat for predatory beetles, farmers seeking sustainability can encourage populations of pollinators and beneficial insects on the farm.  Researcher Doug Landis knows that many native plant species are highly attractive to both pollinators and natural enemies, and with help from a $199,887 NCR-SARE Research and Education grant, […]

Enhancing biodiversity on a farm can result in cleaner air and water and increased wildlife. But what happens when the wildlife gets a little too close to your crop? That’s the problem sweet corn grower, Scott Kelly, was facing on his farm near Kearney, Missouri. “The demands of growing produce sometimes seems never-ending,” said Kelly. […]

Christian and Katie Flickinger were experienced urban farmers in Michigan who were farming eight plots in various locations. When they decided to consolidate their operation and buy a 7-acre farm in Howell, Michigan, they faced the challenge of converting a long-standing, non-rotated cornfield into the organic, heirloom farm of their dreams. Among the other items […] 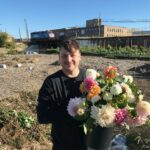 Managing and controlling weeds is an ongoing challenge and frustration for many farmers, but it can be especially cumbersome for organic producers, whose options for herbicides are limited. For these organic producers, no-till and conservation tillage systems can help conserve soil and can be used for weed control. Tom Buller, a vegetable grower and extension […]

In southeast Nebraska where corn and livestock fields dominate the agricultural landscape, Auburn High School agriculture teacher, Ashton Bohling, offers a variety of agricultural education opportunities for curious youth. Students have access to an aquaponics system (an aquaculture system with tilapia) and a 24x48’ greenhouse. With support from a $1,999 NCR-SARE Youth Educator grant, Bohling […]

The beautiful vistas of Ohio’s Appalachian region delight visitors with ancient forested foothills, winding creeks, and unglaciated terrain. In the late 19th century, extraction industries like the coal industry also discovered value in this landscape, but as coal resources declined, local economies deteriorated. Today, scaling up local foods is one way these historic communities are […]