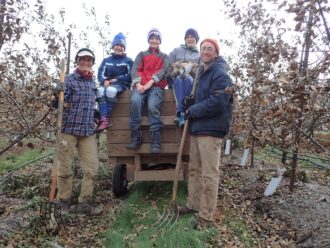 Juli (left) and Chris (right) McGuire gained control of Canada Thistle in their organic apple orchard with support from a SARE grant.

This story appears in the Summer 2021 issue of the NCR-SARE newsletter, Field Notes.

Organic apple growers Chris and Juli McGuire were concerned about the proliferation of Canada thistle in their Lafayette County, Wisconsin apple orchard. The McGuires raise two acres of apples together with other fruits and market them through a community-supported agriculture (CSA) program and local grocery stores. Like most apple growers today, they raise dwarf apple trees because the compact dwarf trees are easy to work with, and they bear fruit quickly, providing a rapid return on investment.

But dwarf apple trees also have shallow roots and can’t withstand competition from weeds. The McGuires spread a thick layer of bark mulch under the trees, which keeps most weeds at bay, but they’ve struggled to control Canada thistle.

“Canada thistle is a perennial weed that spreads from deep roots,” said Chris McGuire. “Once a patch gets established in our mulch, it proliferates. It’s impossible to dig it out without uprooting the nearby fruit trees. As certified organic growers, we don’t spray systemic herbicides to kill it.”

After years of struggling with Canada thistle and watching it spread through their orchard, the McGuires received an NCR-SARE Farmer Rancher grant to trial organic methods for controlling the troublesome weed. Over the 2019 and 2020 growing seasons, they reduced Canada Thistle populations from over 1300 shoots to zero in experimental plots within their orchard.

“The key,” said Chris McGuire, “is that you have to kill the thistle shoots every three weeks repeatedly. They grow back, and then you kill them again three weeks later. We found that any method of killing the shoots is effective – cutting, pulling, or spraying with an organic herbicide. In the past, we would chop out thistle patches every 5-8 weeks, and that’s not often enough. The short, three-week interval exhausts the plants and depletes their strength, gradually killing them. By the end of a single growing season, only a few straggler plants remained in our plots, and by the end of the second year, they were eradicated.”

The McGuires shared a report online at http://www.twoonionfarm.com/CanadaThistleFinalSummary.pdf.