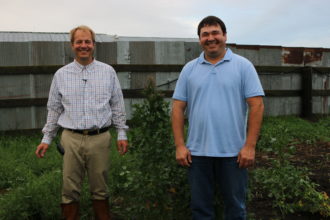 Quinoa [KEEN-wah] is a high protein, gluten-free grain that can be cooked like rice or be ground into flour. The price of quinoa tripled between 2006-2013, achieving $1.10 per pound in 2017. Quinoa’s increased market demand, along with its hardiness in zone 4, has piqued the interest of some regional producers, including Glendon Philbrick of North Dakota.

A farmer and educator, Philbrick lives on the 700-acre farm in Turtle Lake where he grew up, and he is curious about the potential of quinoa for small scale North Dakota farmers. With support from SARE, Philbrick worked with another North Dakota farmer, Steve Eid, to investigate planting methods, harvesting and processing systems, weed control, crop rotation, organic fertilization, and marketing for quinoa.

“Currently, most if not all of the quinoa found in health stores and grocery stores has been imported from nearly four to five thousand miles away,” said Philbrick “This could be an opportunity for organic farmers in North Dakota.”

Philbrick and Eid used a converted corn planter and a press drill to seed quinoa and were able to grow quinoa when conditions allowed for adequate seedbed preparation, timely tillage and planting, little weed competition, and adequate moisture early in the growing season. However, after harvesting the crop, the saponin coating on the quinoa grains proved to be a barrier to marketing.

Quinoa’s bitter saponin coating deters birds and insects, but it must be removed for human consumption. Philbrick and Eid could not find processing equipment to remove the saponin coating within a reasonable proximity. Still, Philbrick remains optimistic about quinoa.

“The advantage of a project such as growing quinoa in central North Dakota is the crop diversification and ability to experiment with new crops,” said Philbrick. “The disadvantage is the limited access to markets with limited quantities (less than a semi load), and lack of equipment in the region for processing.”

Curious about growing or marketing quinoa? Read more about it at the Agricultural Marketing Resource Center.

Philbrick shared information about this project in this video.